Launched in September 2011, Big Innovation Centre exists to build a global innovation hub by 2025, create great companies, and make the world more purposeful and inclusive through the enormous potential of technology, creativity and innovation.

How We Make it Happen

Our open innovation and ecosystem approach

We are world leading the TOP 10 NEW approaches and new skills required, as implementors of the future: 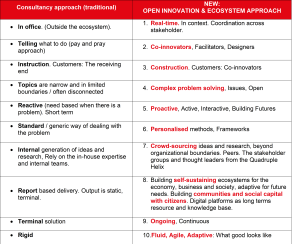 This Is How We Do It

We have suitable research labs, office and events space plus cutting-edge IT equipment with support.
Our spaces are conveniently located in central London next to UK Parliament Square; and in central Riyadh, as well as the business bay of Dubai

Co-Creation Is At Our Heart

We offer an approach of 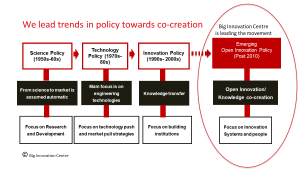 In all the things we do our work is underpinned by five values: Purpose, Ambition, Openness, Excellence, Access.

Our values are ingrained in our name:

The team uphold Big Innovation Centre core values and demonstrate a drive to help fulfil the company’s mission to make the world more purposeful and inclusive through the enormous potential of technology, creativity and innovation.

Big Innovation Centre launched on 8th of September 2011 as part of The Work Foundation (former Industrial Society) in London (which was acquired in October 2010 by Lancaster University), with Professor Birgitte Andersen as the Director driving the vision and Will Hutton as the Chair driving the public purpose, until it’s demerger on 4th of August 2014 when it became an independent company and relaunched with Birgitte and Will as co-founders.

Big Innovation Centre Limited is Registered in England and Wales No. 8613849, and headquartered in London, UK. Offices in London, Riyadh, and Dubai. “Barclays sincerely believes that a digital revolution is upon us and that it is much bigger than the industrial revolution. We do recognize that any such revolution has huge social cost, and this time around we’re committed to leaving no one behind. Technology for the sake of technology is interesting; technology that truly helps and makes people’s lives easier is a big deal and we want to go down that path. I’m really excited about the work that we’re doing together with the Big Innovation Centre. More power to you.”

“We need a financial system that is capable of delivering patient capital – capital that isn’t seeking short-term returns, the sort of thing that the Centre’s Entrepreneurial Finance Hub is seeking to create.”

British MP, Secretary of State for Business, Innovation and Skills

“GSK is eager to take the opportunity to help UK break through innovation barriers as a part of the Big Innovation Centre’s vibrant research and evidence-driven approach. The inclusion of business as integral collaborators is novel, the experience from industry of innovation has largely been missing in research to date and it brings an important additional perspective that we hope will contribute to innovative solutions.”

“BAE Systems has found membership of the Big Innovation Centre stimulating and useful, offering important insights about how to approach open innovation […] while giving opportunities to strengthen our own network.”

“There is a huge amount of political consensus around the importance of innovation. If we want the UK to be able to pay its way in the world it is through innovating – creating those products and services that no one else is providing that the world wants. This is absolutely fundamental to raising people’s living standards which is why we absolutely support what the Big Innovation Centre is doing. We can all agree on the importance of the Centre and I look forward to you scaling up and becoming even bigger.”

‘The Innovator’ column, established with the Big Innovation Centre to reveal what good innovators look like, will raise the profile of innovation to where it needs to be.”

“Google values the Big Innovation Centre network enormously and the opportunities it creates to meet other businesses and innovators.

“It’s a great space to learn about new ideas and to collaborate on some of the biggest challenges we face together.”

Minister of State for Universities and Science, Department for Business, Innovation and Skills

“We were very impressed with Professor Birgitte [CEO Big Innovation Centre]. She has the vision of the global innovation hub.”

“Today the UK energy sector is facing huge changes in customer expectations. We’re also facing changes in how that energy is generated, transported, stored and managed. That makes it an exciting time and one that means that we need innovation. EDF Energy has been really pleased to work with Will [Chair, Big Innovation Centre], Birgitte [CEO, Big Innovation Centre] and their team to explore some of these issues our society is facing. We believe that as a big company we can contribute, but we can also learn a lot.”

“The Big Innovation Centre is composed of fast, enthusiastic and creative learners. This business is going to scale up very rapidly.”