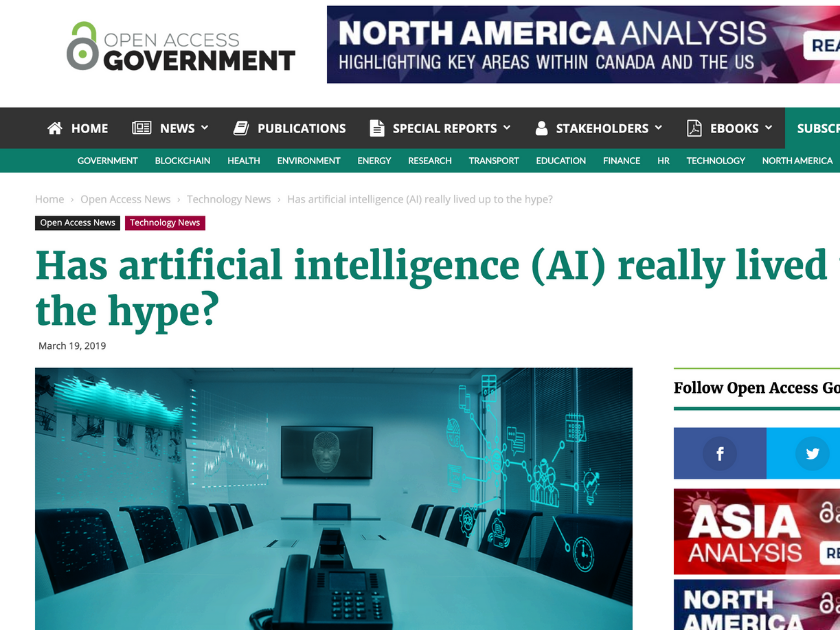 HAS ARTIFICIAL INTELLIGENCE (AI) REALLY LIVED UP TO THE HYPE?

An article produced by Open Access Government on 19 March 2019.

Featuring: Big Innovation Centre’s Analytics contribute groundbreaking numbers showing how much investment is being poured into the UK AI Business.

Nikolas Kairinos, CEO and Founder, Fountech discusses how far artificial intelligence (AI) has come over the years and whether it has lived up to the hype surrounding it.

Regardless of the industry you work in, you’ve no doubt heard about artificial intelligence (AI) and its potential in changing the world around us. The technology has been a source of debate in the private and public sectors for more than 50 years, and yet it has only been in the last decade that we’ve begun to really see momentum build in the AI space.

But what actually is AI? Leaving the jargon to one side, it should simply be understood as the use of computer systems to perform tasks that would normally require human intelligence.

To date, there has been some significant progress made in the adoption of AI technologies, with industries from financial services to healthcare demonstrating a keen willingness to use AI to their advantage. At the same time, investment has been pouring in at unprecedented levels; investment into UK AI businesses alone now exceeds £3.8 billion according to Big Innovation Centre and Deep Knowledge Analytics.

However, despite its rich history and the huge amount of attention that has been dedicated to furthering research in the AI space, there is speculation that organisations are beginning to question the real-life potential of this much talked about technology. Indeed, after several years of sustained hype, some critics are stating that unrealistic expectations have been set that simply cannot be met.

The questions beckons, there, is AI actually living up to the hype?

There is an inherent challenge when projecting the time it will take for new technologies to change the way businesses and consumers carry out tasks. Thankfully, Gartner’s Hyper Cycle provides us with a useful – albeit imperfect – framework to understand how the application of a new technology evolves over time. In essence, the ‘hype cycle’ suggests that we tend to overestimate the disruptive potential of a technological trend in the short run while underestimating its effect over a longer period.

AI reached the peak of the ‘hype cycle’ on the back of success stories like Tesla’s driverless car and DeepMind’s AlphaZero, a programme which taught itself to play chess starting with no knowledge of the game beyond its basic rules. AI’s potential, it seemed, was endless.

But as we have reached the practical application stage, where organisations large and small began adopting AI, some limitations of the technology have come to light and are casting a shadow over its touted potential. As a result, AI now finds itself in the so-called ‘trough of disillusionment’ – a period when interest wanes and the technology fails to meet initial expectations.

Take Tesla as an example. The technology powering these self-driving vehicles has undoubtedly changed the game for the transportation industry. But it is also becoming increasingly obvious that AI is not at a stage yet where it can replace human beings when it comes to performing certain tasks – such as adapting quickly to sudden and unpredictable changes.

Tesla’s example is not unique. Consequently, the early buzz surrounding AI is starting to wane. Indeed, there are projections that the AI market will only reach $39 billion in global value in 2023, which is significantly lower than previous forecasts.

Furthermore, while businesses are aware of the importance of AI, the process of adopting such technology has been slow, particularly among SMEs. A report from Bluewolf found that only one-in-five (21%) small businesses have implemented AI-based solutions.

Momentum surrounding AI might have slowed, but this shouldn’t be cause for concern. Rather, it should be seen as the natural stage in the industry’s long-term evolution. It will take time for the market to mature, and for there to be a wider understanding of how AI – in its many forms – can be practically applied.

For now, it is important for all types of organisations, ranging from private businesses to public organisations, to develop an understanding of how AI can be used to their advantage. For the technology to develop and for its implementation to be successful, education over the coming months and years will be vitally important, because the potential of AI is quite simply staggering.

While we won’t be seeing flying cars or cyborgs anytime soon, we shouldn’t overlook the practical application AI can now provide to organisations seeking to improve the way they operate or to enhance an existing product. We’ve only just scratched the surface when it comes to AI, which makes the future all the more exciting.

Just as it is irresponsible to over-hype a technology that is still in its infancy – claiming it is a silver bullet to any number of issues – it would also be naïve to dismiss AI’s promises as being without substance. Once a deeper understanding develops of what AI means, what it can achieve and how best to harness it, there are huge gains to be made by its adopters.