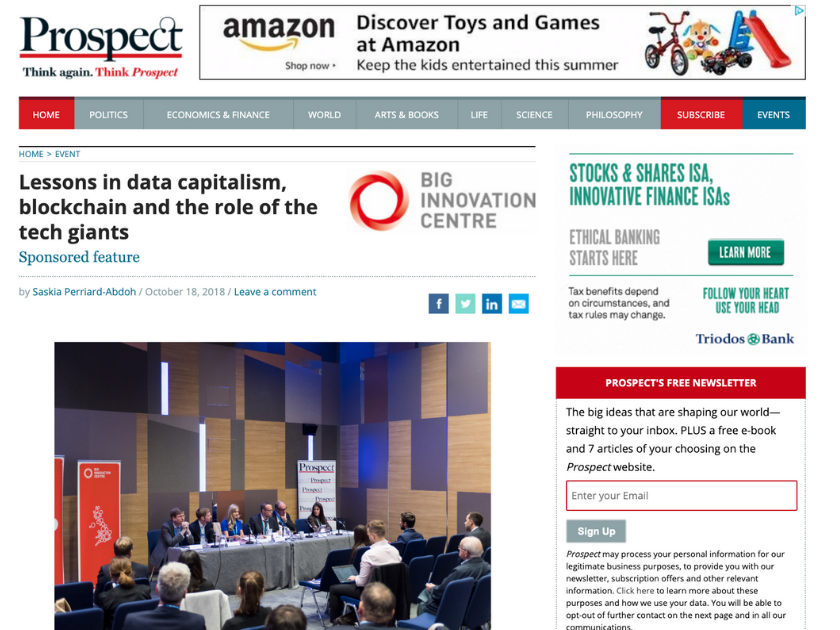 Lessons in data capitalism, blockchain and the role of the tech giants

Featuring: Birgitte Andersen, CEO and co-creator of Big Innovation Centre argues that data capitalism is still in its “wild west” stage and this is helping tech giants.

What is the role of the regulator in the digital age? How do we ensure technology companies – the tech giants – are accountable to their users? How can we give start-ups the time and space to grow? Beyond cryptocurrencies, how might the use of blockchain-based technologies lead to innovative new services?

At a wide-ranging panel discussion at this autumn’s Conservative Party annual conference policy makers, academics and technologists came together to debate best practice in an era of data capitalism. Here are just some of the lessons shared – and lessons learned – over the course of the 70-minute discussion.

Good legislation and good regulation requires a fuller understanding of how digital technologies have overturned some of our core assumptions about capitalism. Birgitte Andersen, CEO and co-creator of Big Innovation Centre argues that data capitalism is still in its “wild west” stage. “We are working with regulation from the old economy, based on ownership rather than user rights,” she said. “We are helping tech giants as a result because they control all our data and all the machine data. They control the platforms as well.” The introduction of GDPR – the EU General Data Protection Regulation – in May was a step in the right direction, albeit “a very, very small thing in the bigger picture”.

As it is with ownership so it is with products. “What are we competing on?” asked Andersen rhetorically. “We think we are competing on product markets. The Competition and Markets Authority is always looking at your market share and your product market but [in fact] it’s about competing on network effects, platform control and data control. None of these things have anything to do with product markets. If we think we can solve the problem by splitting up a big tech giant, we’re wrong.” The impact of these shifts on the citizens often gets lost, said Lee Rowley, Conservative MP for North East Derbyshire. “I represent a post-industrial community in the Midlands. We’re taking a punt … on logistics and manufacturing. My concern is that in 15 years’ time there will be no jobs in logistics and manufacturing. And having pulled ourselves out of our problems around loss of jobs with the closure of the coalfields we may be on the cusp of another problem when all these jobs go. Those are the practical implications from a public policy perspective.”

At its most fundamental blockchain, or distributed ledger technology, provides a shared, encrypted and immutable record of a transaction. And as such it is perfectly applicable to range of public service needs. “So many areas of the public sector sits on a database, a canonical set,” said Chris Francis, director of government relations at enterprise software firm SAP. “Almost anything you can think of … where there is a public sector interest – customs, borders, driving licences, land registry and so on – is applicable.” Add to that list any private sector business that relies on its supply chain – a pharmaceutical cold chain, for example. Carmen Benitez, CEO and co-founder of Fetch Blockchain has built a land registry business based on this rational. “We want the mechanics of a title and all the functions of a title to exist within a title rather than through the separate parts that currently define the real estate process,” she said describing the current practice as “very intermediary driven, very corruptible and very opaque”. Blockchain-enabled titles could, she argued, help to address the housing crisis. “We could make the process more liquid so we wouldn’t necessarily need to keep building more and more housing – we could just transact more efficiently and faster.”

Up to a point, at least. “Is blockchain hyped? If it is, it’s not a problem,” said Birgitte Andersen. “People will have to get their heads around it because it will happen anyway.” Chris Francis compared talking about blockchain at a conference in 2018 to talking about TCP/IP, the underpinnings of the internet, thirty years ago. “Distributed ledger technology is potentially as powerful as the internet,” said Will Hutton, chair of Big Innovation Centre steering committee. Meanwhile, Lee Rowley argued that politicians should be talking more, not less about the potential of technologies including blockchain and artificial intelligence. “We spend 80 per cent of our time talking about Brexit when we should probably be spending 80 per cent of our time in Parliament talking about things like this.”

An attendee compared cryptocurrencies to the evil twin of distributed ledger technology. He asked how we can prevent legitimate blockchain-based innovations from becoming infected by what Warren Buffet calls ‘rat poison squared’? Carmen Benitez insisted that cryptocurrencies were “a different space altogether” and people would appreciate the difference. Referring to the use of blockchain technologies to drive business of societal need she said, “it’s the same application as the cryptocurrencies use but it’s an enterprise play, it’s a completely different type of approach.” Lee Rowley said cryptocurrencies were “digital tulips”, a nod to the Dutch bulb market bubble of the 1600s. “It’s speculative,” he said. “One good role of regulation would be to regulate the entry and exit points of cryptocurrency, regulate the exchanges. As a low tax, low regulation Tory there’s a real opportunity to regulate there because I think that’s a necessity.” However, he warned against the unintended consequences of “privatising the speculation and nationalising the risk.”

“Google has bought 200 companies, many of them in Britain, over the last 15 years which could have been insurgents, could have been British players and could have, potentially, taken technology in different directions,” said Will Hutton who noted that Google’s former executive chairman Eric Schmidt dubbed this as the ‘killed in the crib’ approach to early acquisition. To redress the balance and allow startups the space to thrive, the Competition and Markets Authority (CMA) needs to step in. “These small companies face awesome concentrations of corporate power and are unable to share information together to take them on. The CMA should be much more enabling for small firms forming alliances to challenge big tech monopolies.” Carmen Benitez said that sometimes you need to give start-ups a free pass when it comes to regulations. “Should we allow FinTech companies more freedoms? Absolutely we should,” she said. “To stop these companies being bought out by tech giants you have to nurture them. They need a best alternative option.”

“Brexit or no Brexit, we’re going to have to collaborate with the European Union competition authorities because in the end that’s where power lies,” noted Will Hutton. “It’s the European Commission that has levied some of the biggest fines … for anti-competitive behaviour. One country doesn’t have the clout.”

Big Innovation Centre advocates for the creation of a data charter that would enshrine the rights and responsibilities of individuals and organisations. Intriguingly, it is based on the presumption that while all data is personally owned, we should default to sharing rather than hoarding our data. “Sharing your data is part of being a citizen,” said Birgitte Andersen. “We should all be opted in. It’s unethical not to be in the community.” To ensure data sharing happens on the right terms, all organisations should:

One attendee suggested that politicians struggling to understand the complex arena of emerging technologies should instead deal with one thing – namely, how to deal with the potential harms of tech. “That’s exactly the right question to ask,” agreed Lee Rowley who is co-chair of the Cross-Party Parliamentary Commission on Technology Ethics. “That is exactly the terms of reference we put together for the commission because you have to start somewhere.” The challenge, however, is defining what harm looks like. For example, a computer pretending to be human offering robo-advice may be benign today but not tomorrow. “Eventually when the robots get a lot more sophisticated and you can’t work out that it’s a robot, then things get more difficult.” On ethics, Will Hutton added: “Companies should incorporate around purpose and be held to account for delivering on that purpose.”

So said SAP’s Chris Francis. “The public sector is behind the private sector and across the whole of the economy we are dragging at the bottom of the OECD index. We have what is sometimes termed a productivity crisis. All of this is about the application of tech to improve productivity.” Birgitte Anderson agreed. “If we talk about the positive effects then expect double or triple growth rates, productivity up, cost of services down, and healthier, happier longer lives.”

‘Rise of Tech Giants and Data Capitalism: The New YOU on Blockchains?’, a Prospect panel discussion – in association with Big Innovation Centre – took place during the Conservative Party annual conference in Birmingham on 30 September 2018.