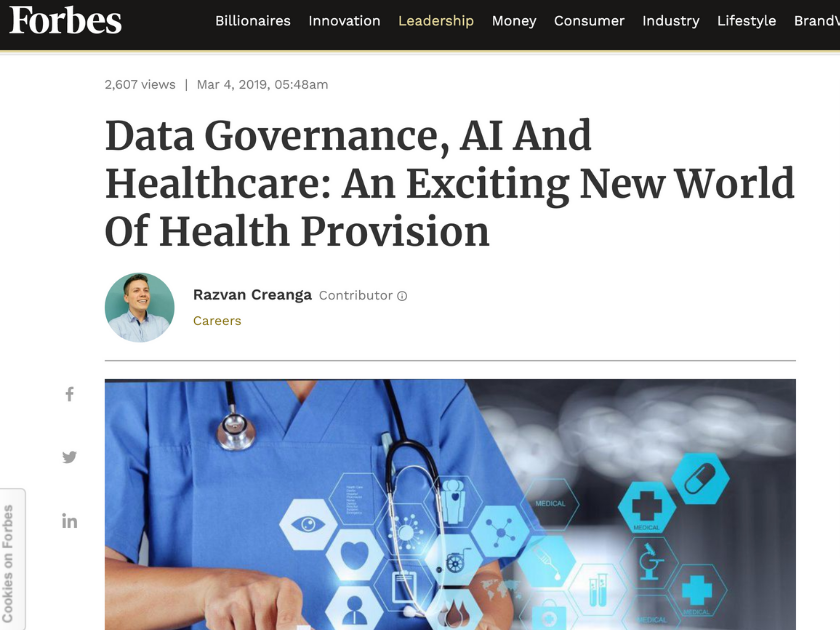 An article produced by Forbes on 4 March 2019. Written by Razvan Creanga.

Featuring: An All-Party Parliamentary Group (APPG) on Artificial Intelligence was set up in January 2017 to specifically explore how technology might revolutionise and affect our lives.

As AI becomes more commonplace, there’s an increased need for data governance. It’s an issue that’s been identified by the government, as it recently announced an ethics group to oversee large groups of data sets. An All-Party Parliamentary Group (APPG) on Artificial Intelligence was set up in January 2017 to specifically explore how the technology might impact and have implications on our lives.

The issue of data governance is complex, and the solution everyone is hoping to come to is a safe, secure and regulated framework that is effective while keeping on the ‘right’ side of the right to privacy.

The healthcare sector is an area where AI has already had huge impact – and it poses fascinating questions around analysing health data, and the importance of regulating big data and biometrics on individual and mass scales. Just a few weeks ago Imperial College London announced a landmark use of AI to support the treatment of ovarian cancer, using data to develop more accurate prognoses. This was part of a closed trial in Hammersmith Hospital and University of Melbourne, and its success hinged on patents’ consent for the use of their use health data. This is just one study – with huge potential – but imagine the potential results of large-scale data modelling – and the data security minefield.

In America, Facebook and NYU collaborated on the fastMRI project, aiming to make MRI scans up to ten times faster. AI has the potential to automate certain parts of the radiology process, playing the role of the second ‘reader’ of data once it has been scanned, alleviating staffing pressures and potentially narrowing the margin for error.

For medical innovations built on data and automation to thrive, we have to improve societal understanding and the regulatory environment for data sharing. There’s an interesting debate in medical circles about how transparency and simple communication about how patient data will be used use may increase a patient’s willingness to share data in order to further science. One example is in blood donation, and how text notifications on how the blood was used afterwards actually increases participation rates.