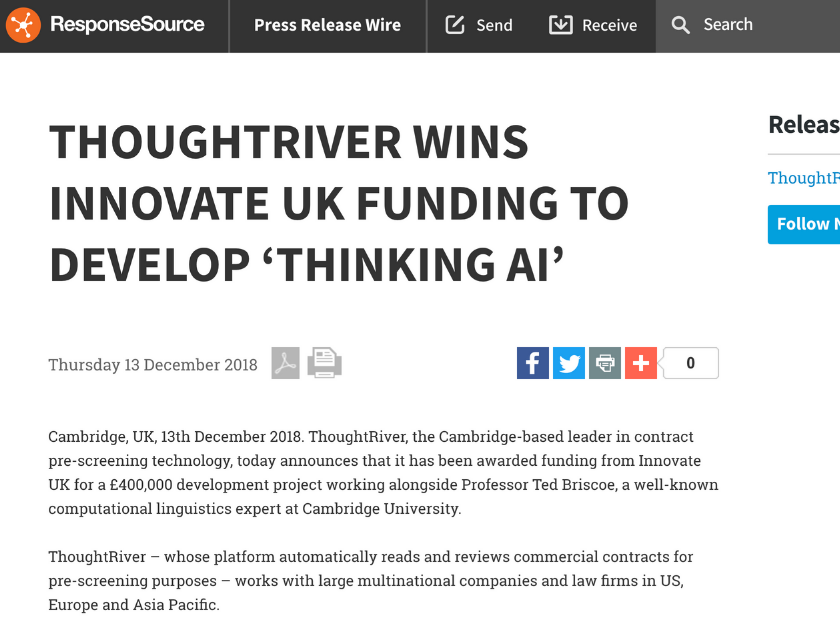 An article produced by ResponseSource on 13 December 2018.

ThoughtRiver, the Cambridge-based leader in contract pre-screening technology, today announces that it has been awarded funding from Innovate UK for a £400,000 development project working alongside Professor Ted Briscoe, a well-known computational linguistics expert at Cambridge University.

ThoughtRiver – whose platform automatically reads and reviews commercial contracts for pre-screening purposes – works with large multinational companies and law firms in US, Europe and Asia Pacific.

The radical research concept – codenamed DBA – represents a significant advance in the ability of computers to rationalise complex problems in novel scenarios based on self-taught logic. The resulting technology will enable increasingly sophisticated and higher-level questions about previously unseen contracts to be automatically answered.

The project will be progressed in collaboration with Ted Briscoe’s NLP consultancy iLexIR.

ThoughtRiver was founded in early 2016 and their technology was developed by working with senior NLP and machine learning experts in Cambridge. The company has already pioneered numerous advanced technologies that automatically summarise and review the risk within contracts in minutes.

Increased industry adoption of AI technology will allow professional services firms to provide more valuable and powerful risk management, auditing and insurance services to consumers, corporates and shareholders. It will also support the UK’s leadership in these important industries as recognised by the Innovate UK fund and initiatives such as the All Party Parliamentary Group on Artificial Intelligence.

Co-chair of APPG AI Lord Tim Clement-Jones commented “I am a strong advocate of world-leading AI R&D taking place in the UK – especially in the context of key export industries such as legal services – and thrilled that Tim and the ThoughtRiver team have been awarded this project”.

The project – a brainchild of the collaborators – will make cutting edge AI technology available to a broader audience by enabling lay users to get answers to powerful questions without significant training or configuration effort.

Tim Pullan, CEO of ThoughtRiver, said, “We have invested heavily in ground breaking digitisation technology to drag contracting into the 21st century. This project represents a further significant step forward and we are honoured to be recognised by Innovate UK and to be working on another project with Ted and his team.”

Professor Ted Briscoe added, “This is a technically exciting and challenging project and we are looking forward to working with the ThoughtRiver team in 2019.”

ThoughtRiver addresses a fundamental problem for in-house counsels and lawyers: you don’t know whether you need to read a contract without reading it. This pre-screening triage was historically provided manually, but these days most organisations don’t have the luxury of people to do this work. ThoughtRiver’s pre-screening technology is able to automate this human triaging process by reading the contract, identifying parties, answering questions, and then telling you what to read and why you need to read it, in just the same way a good paralegal would. However, our technology never gets tired, does not stop to eat or drink, and only gets smarter with time.